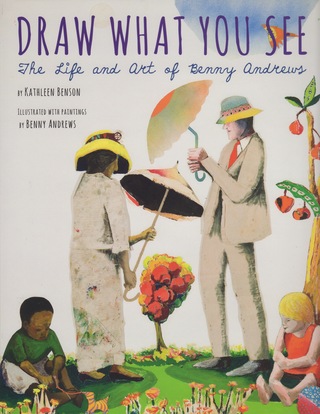 Available to order from:

Draw What You See: The Life and Art of Benny Andrews

Honorable Mention in the Best Biography (Artist) category of the Huffington Post's Best Picture Books of 2015.

"There's no better illustrator for this narrative than Andrews himself."
—Booklist, June 1, 2014

"Photographs of the artist in his studio open and close the book. His artwork and his story will inspire children to both 'draw what they see' and live out their dreams."
—Shelf Awareness, December 17, 2014

"This singular biography refocuses attention on the struggle for social justice through the extraordinary visions of this singular painter—every illustration is the artist's own."
—Kirkus, starred review, December 1, 2014

"The narrative is expertly crafted around original Andrews paintings, which are notable for their focus on autobiographical elements and people’s experiences of prejudice as well as for the expressionistic stylization of figures."
—Horn Book Magazine, January 2015

“Every image has a magnetic intelligence that is hard to look away from, along with many small details of exquisite loveliness . . . . Benson’s language is workmanlike, letting the inspirational facts of Andrews’s life speak for themselves. She shapes his story to emphasize the artist’s social activism and sense of mission.“
—The New York Times Book Review, January 11, 2015

“This biography of the groundbreaking work of Andrews couldn’t be in better hands.”
—Kirkus, January 16, 2015

“It is a children’s book, but that is a technicality. Kathleen Benson’s text is plain spoken and straightforward, but not baby-ish. No “See Benny paint,” no.”
—FrancesSchultz.com, February 21, 2015

Draw What You See: The Life and Art of Benny Andrews
A biography of the influential African American artist and activist, illustrated with his own collages.
The Story of Civil Rights Hero John Lewis, with Jim Haskins

This short chapter book, illustrated with historical photographs and line drawings by artist Aaron Boyd, features sidebars devoted to sharecropping, Mohandas K. Gandhi, the Student Nonviolent Coordinating Committee, and the Black Church and the Civil Rights Movement and includes a timeline and glossary as well as recommendations for further reading.