(The photo below was taken by LeCora Okeagu at La Casa Azul Bookstore in East Harlem, NY) 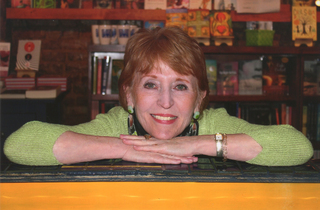 I was born in Keene, New Hampshire, and raised with my two brothers in Windsor Locks, Connecticut. While studying at the University of Connecticut, I started working summers at the Museum of the City of New York. In the fall of 1969 I joined the staff as a fulltime employee, starting in the Education Department and holding a variety of positions over the years, ending as an exhibitions and publications project manager. I retired in May 2012.

Between 1968, when I met my late husband Jim Haskins, and 2005, when he died, we worked together on some 150 books—mostly for children and young adults, but a few of them for the adult trade audience—on some of which I was listed as co-author. I was sole author of one fiction and one non-fiction book for young people in the 1980s. I also had several crossword puzzles published in the daily New York Times.

In January 2015 my book Draw What You See: The Life and Art of Benny Andrews, was published by Clarion Books. The artist Benny Andrews, who died a year after Jim did, had illustrated the last two children’s books on which Jim and I worked, and I had come to know him through that collaboration.

While at the Museum of the City of New York, I worked on exhibitions with a great variety of the city’s myriad of ethnic communities and with the local community of East Harlem, and in retirement I have transitioned smoothly into working for free. I serve on the boards of Hope Community, an affordable housing organization in East Harlem, and East Harlem Preservation and have served on the East Harlem Holiday Tree Committee for over a decade. I also chair the board of Community Works, an arts-in-education organization that presents programs all over the city but with a special concentration in northern Manhattan.

I take advantage of all the wonderful cultural opportunities New York City has to offer, travel domestically and abroad, and enjoy the company of Jim’s and my daughter, Margaret Emily.

Draw What You See: The Life and Art of Benny Andrews
A biography of the influential African American artist and activist, illustrated with his own collages.
The Story of Civil Rights Hero John Lewis, with Jim Haskins

This short chapter book, illustrated with historical photographs and line drawings by artist Aaron Boyd, features sidebars devoted to sharecropping, Mohandas K. Gandhi, the Student Nonviolent Coordinating Committee, and the Black Church and the Civil Rights Movement and includes a timeline and glossary as well as recommendations for further reading.